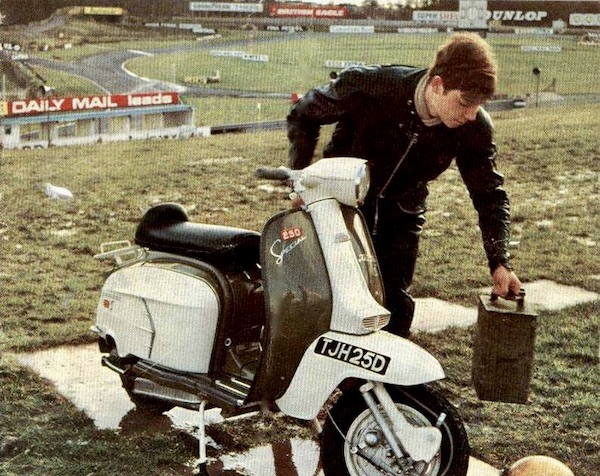 The 250 and it's Achilles Heel

The Lambretta scooter was created as basic city transport in Italy, after their world war two defeat. The first model was a 125 on seven-inch wheels without even rear suspension. Developed commercially to the D and Ld 150 models (the E and F were aberrations), the manufacturers Innocenti still considered 150 cc would be the maximum capacity required when designing the Li series. Later, their first TV (Series 1) was almost all new and both over engineered and expensive. It was another aberration, but it identified a market for a 175 that Lambretta then served by enlarging the capacity of the Li engine. This was easy to do as they used the same crankcase.

Later still, and adamant there would never be a 200 (Innocenti cited excessive vibration), a reliable source told me Peter Agg (Lambretta Concessionaires) had to assure the importing of a quantity into the UK that would cover all the tooling costs before Innocenti would reconsider their position. Then there would be no design compromise. The factory 200 was based on a new crankcase with a wider neck with stud spacing to accommodate the larger cylinder skirt. This was just one of a raft of new parts.

This 200 development would be the essential format for a 250 - accommodating an even larger cylinder, modifying the standard crankcase and using off the shelf parts to minimise the cost. From the inception I treated the 250 as a personal project. Any subsequent production and sales would be a bonus. I chose a Bultaco as the donor and made a platform for the cylinder, studs and transfer ports from 12mm alloy, which was welded onto a cut down Lambretta crankcase. The cylinder fins and head were machined to fit in the standard cowling and so retain fan cooling; everything else was pretty straightforward except the crankshaft, which required a crankpin that was not concentric

Installed in my 250 ‘S’ type, it fired up second kick. Vibration was negligible, the tick over was perfect and, even when treated with respect while running it in, the acceleration was outstanding. I could not fault it during the first six hundred miles. Then, changing gear at high revs, a crankshaft web twisted on the crankpin. A new crankshaft with a tighter fit at the webs to the crankpin seemed to resolve the problem and I decided to gauge reaction by entering it in the unlimited class at a circuit race. After half a lap it was so far ahead of the field I could have coasted but it was such fun I continued using all the power. Then that crankshaft also failed!

Advice was taken, the conclusion that a completely new crankshaft would be required, an additional cost that finished any chance that the 250 could be a commercial proposition. I even baulked at the price for my own engine and compromised by limiting the engine revs. With my fingers crossed, it survived road testing and received impressive reviews!

By the mid 1960’s scooter top speed attempts included a Lambretta kneeler called Atlanta V, which obtained considerable media coverage - though more from rider Marlene Parker in all white leathers – than for breaking any records. Later it was offered to me, less the engine. I bought it for very little money, though - at the time - I had no plans for using it.

I was dabbling in sprinting driving a Fiat 600 powered Ford 1600 when I saw a scooter running at Santa Pod. I was intrigued. My 250 engine and the Atlanta frame were gathering dust, so I put the two together, choosing a meeting at Duxford for a trial run. The engine was still restricted and the handling poor, but I managed mid 15 seconds for the standing quarter mile. I modified the frame for better straight line handling and tidied up the crude foot gear change for sprinting at Santa Pod. I also removed the rev limiter, relying on smooth gear changing for reliability.

My most memorable moment was the only occasion I raced Fred Willingham - the Lambretta king of speed. Both of us went to a Santa Pod meeting without knowing the other would be there and the organisers introduced a best of three runs for us as an addition to the programme. I won two of the three, but it was the last time I used the 250 engine. A few months later, I was really pleased for Fred, when he was the first to break the ton at - 104mph.