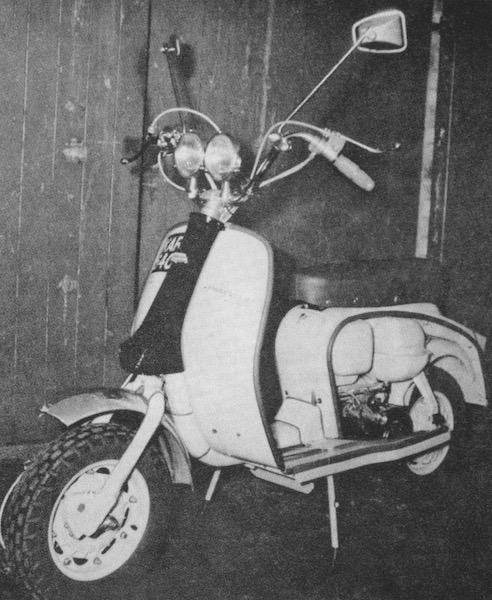 I had an Everest attitude (Q: Why do you want to climb it? A: Because it’s there) and so I took my scootering into the bastions of motorcycling.

These included from London to the West Country on a mix of road and special trials sections that were a challenge to even twenty inch wheels and another that finished in Manchester after visiting as many check points as possible in exactly 600 miles. There was a long off road section to the finish but it was more route pre planning and endurance than riding skill, as - adding the mileage getting to the start and back from Manchester - put 900 miles on the clock. There was never any animosity from the bikers. At the checkpoints they were friendly, curious and even expressed grudging admiration, though behind the handshakes they probably doubted my sanity!

My parts manager, Ken Peters, created his own Everest and obtained a lot of publicity riding my Lambretta ‘A’ model to the Innocenti factory and back, which was widely reported. Douglas asked me to promote the Vespa SS 90 and liked my idea of two young ladies sharing a run to the Piaggio factory in 24 hours. In practice one would be riding while the other rested in my escort and refueling car. They made it to the factory, but just outside the target time, having lost power by crashing during an unseasonable snowstorm, damaging the silencer. Unknown to me Douglas had built on my idea and arranged with another UK dealer to do the return run with the repaired SS 90 ridden this time by two males. Our previous failure was tempered when they took longer than my girls.

Shed loads of ideas came from impromptu brainstorming sessions with the staff, usually after work in our local pub and one idea resulted in the building of a scooter chopper. It was a one off, but it led to orders for essentially standard models with the controls altered. One altered example was for a lad with his left arm so weak he could not operate the standard clutch or gear change.

Another idea was certainly alcohol fuelled: How quickly could we get a Lambretta to the Innocenti factory, without an escort vehicle and with only one rider. Somehow it still seemed a good idea? The next morning and sober it still seemed like a good idea, Ken was ‘up for it’ and a couple of months later we had the answer: Under seventeen hours - by an ‘S’ type with an extra fuel tank and 12 volt lighting. The planning included being at the Dover ferry port within a five-minute window and first off at Calais. It was still pretty impressive when the only way across the channel then was a ponderous ferry.

Year on year more sales were to people who had been referred, but - with hindsight - I should have asked these others, ‘How did you hear about us?’ as most were unknown to me before they walked into the showroom. Some just collected their new scooter after ordering by telephone or post. I still believe that advertising and editorial articles were the most effective part of generating sales, though success at competitive events cannot be discounted, especially the annual Isle of Man events which always had a huge following of spectators.