What happened after that? By the time we got to 1970, we'd been at it for over eight years and at that stage, Arthur had a 125 Vega. It was sprayed black and I ended up with it. I stripped it down to bare metal and took it down to Arthur who sprayed it with three or four coats in the morning. 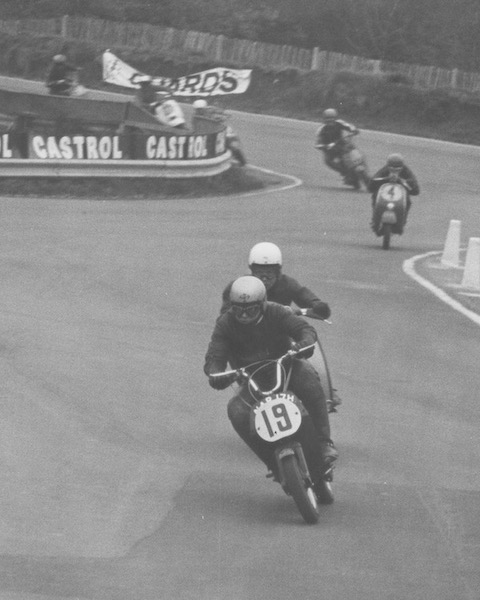 Then we went to the pub for lunch, then came back later put the heaters on it and left it to dry. Later in the afternoon, I drove home with it stuffed in my Fiat 500. It sat on the bed in our spare bedroom for a few weeks and then I rebuilt it.

My father, being an engineer, helped me and an awful lot of work was done on the Vega, I could do all the metalwork, but my father sorted the welding that I wanted doing. I read up on tuning two-strokes; everyone else was going for revs, but I decided I wanted torque, so I got a set of bevel gears (not so easy to get in those days) and made up a unit which would go down the barrel, so I could put a horizontal file into the transfer  ports, reshape them, polish them  and the inlet/exhaust ports.

Father helped me with the silencer, but the trouble in those days was that whatever you did, everybody copied it. So we made a full-blown  squish silencer, but hid it inside the standard silencer. The gear ratio proved to be too low, so we got a sprocket to go on to the front end of the crankshaft, turned it down in the lathe, turned the boss down, put new onto the old boss, then welded it up - so we had actually made our own gears to increase the gear ratios.

The carburettor manifold, I fabricated in aluminium and father welded it together. At some stage we decided on a central plug; to get it in we lengthened the rear back suspension. We didn't realise quite what we were doing at the time, but we'd actually reduced the geometry of the bike not a good idea because the first time at Mallory it went like hell but got into a 'tank slapping' situation, which made a right mess of it, not to mention me.

That Vega was clocked touching 80mph at Snetterton it went like the wind. After I finished riding it, John took it over. Then when he had finished riding it, it went to Mike Karslake's museum. When the museum closed, Arthur took it back to London {although we'd done all the work on it, by rights it was stili Arthur's bike). However, knowing all the engineering work that had been done on it, he was happy for us to have it back, provided we could replace it with a more standard one. At this point, however, fate set in and the bike was stolen quite upsetting for all concerned. It was a bit of history that just disappeared forever.

John became secretary of the LCGB and that was probably around the time he actually stopped riding. By that stage Christine and I had our daughter, Karen, and life took on a different perspective. With family commitments to fulfil, we eventually moved on to other things.

Following the loss of the Vega and now in retirement, Norman is now in the process of building an Innocenti 125DL, which will be an identical replica of the Lambretta S-Type which he competed on at the Isle of Man during 1969.